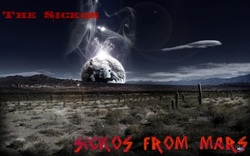 The Sickos are a group of misfit hardcore monster guys. They do what ever they want when they want. The band started out first as just Ziggy (David Ziker) and Mr. Stix (Steven Williams). At the age of 14 Ziggy and Mr. Stix have been hanging strong. Two years later they meet Leo (Leonardo Jones), a badass 16 year-old with an even badder attitude. With a bassist, a guitarist and a drummer the band was just simply Sick Kids. One time they played at the park as a joke and an old guy at the age of 30 threw a bottle straight at Ziggy's head. After a brutal fight with Leo, Murdoc became the rhythm guitarist of the newly name band The Sickos.

Later the band met an awesome chick, SwaggaKidd (Brandy Coleman), who agreed to be the guys manager. The guys and SwaggaKidd have been working hard ever since their first concert at the garage. After 2 years of working with her the band finally got the deal the have been looking for. Luckily, SwaggaKidd knows many people in high places, so the band finally gets a record deal with the top label Metal Militia Records!

The Sickos sold over 30(Thousand) copies of "Sickos From Mars". The band is currently working on their next album to be released soon. So be on the look our for singles along the way!